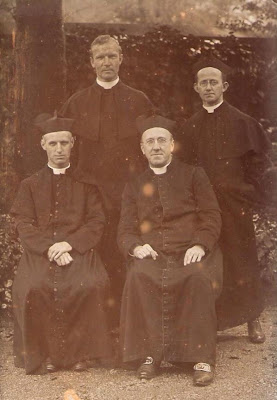 Canon Billington, second rector of St Peter's and the parish historian who inspired this blog, was appointed rector at Lancaster on this day in 1893. Regular readers will recognise him, of course, but just in case you're in any doubt, he is seen here seated on the right of the image, a photograph which was unearthed during the course of 2009. The picture was not labelled, though it seems likely that the priests with him are his assistants in the parish. The first post on this blog gave a little information about his life before coming to Lancaster, so today's post is intended to provide a brief record of his many achievements here. Canon Billington remained at St Peter's until his death in 1916, and during his 23 years he achieved a great deal: he had the St Peter windows installed, he built the wonderful baptistery, he oversaw all the work of the golden jubilee, which included a reordering of the sanctuary and other major works, and - of course - he published a parish history with John Brownbill in 1910. It was a time of great activity in the parish and has left a legacy which is still obvious today; Canon Billington's zeal also helped prepare for the time when - eight years after his death - the church would be made the Cathedral of the new Diocese of Lancaster.

Posted by Canon Billington at 6:15 am