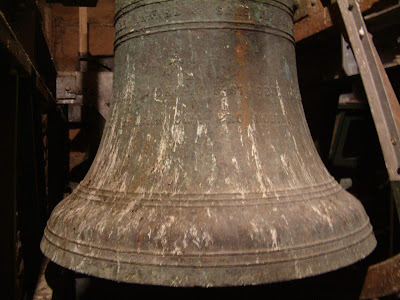 The original eight bells at St Peter's were consecrated on this day in 1879, less than a month after the death of their donor, Mr John Gardner of Greaves. Canon Billington tells us that the bells "were cast by Warner & Sons of London, and were consecrated by the Bishop of Liverpool [Dr Bernard O'Reilly] on December 21, two days after their arrival. The bishop gave an address, explaining the service and touching upon various customs of blessing persons and things. In his exhortation to attend 'the voices of the bells' of St. Peter's, he asked the people not to be unmindful of him who had passed away, the giver of the bells: 'Pray for him that God may reward his charity; pray for him that though he did not live to have the satisfaction of hearing these bells themselves, he may now - or if not now, he may speedily - be amongst the choirs of the blessed and unite his voice with the voices of the countless myriads who still sing God's praises for ever and ever.' " Two more bells were added and consecrated in 1948. Each bell carries and inscription including one of the Beatitudes and the name of a saint; in the photograph here it is just possible to make out the text on this bell. Click on the image for a larger version.