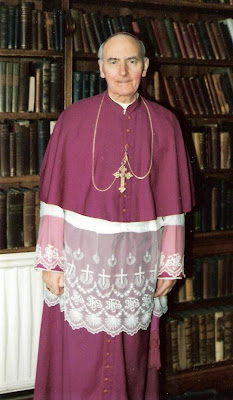 Lancaster's third Bishop, Brian Charles Foley, died ten years ago today. He had retired fourteen years earlier, but had spent those last years engaged in both study and in pastoral activity. In retirement he lived at Nazareth House but was also well-known to the residents of the Ridge Estate, which he often visited; in a sense, he returned to the duties with which he had been so familiar as a priest in the Brentwood Diocese in the 1950s, when he was noted for his house-to-house visits. "Better to ring the house bells than the church bells", he would say. A scholarly man, he was awarded an honorary degree of Doctor of Literature by the University of Lancaster, and published three books in his years of retirement: two on the people of the penal times and one on the history of the jubilee years 1300-1975. 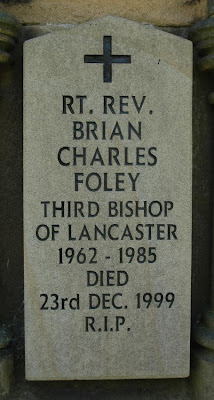 During his time in office the Bishop had guided the Diocese of Lancaster through the difficult years following the Second Vatican Council, at which he himself had participated. No doubt his considerable historical knowledge helped him to guide the Diocese through those turbulent years. At his requiem Mass in the Cathedral, Archbishop Kelly of Liverpool spoke about the Bishop's life of prayer, spiritual reading and study, and noted, "The true historian, the true pastor of so many todays, has true authority to speak of the future." There was also a statement which Bishop Foley had written to be read at his funeral, in which he asked forgiveness for his failings and commended the clergy, religious and laity of the Dioceses of Lancaster and Brentwood. Carried out of the church to John Lingard's famous hymn, 'Hail, Queen of Heaven', he was laid to rest in the Cathedral cemetery. Sadly his successor, Bishop John Brewer, was unable to attend his funeral due to illness, and within six months the Cathedral was hosting another episcopal funeral.

Posted by Canon Billington at 6:41 am