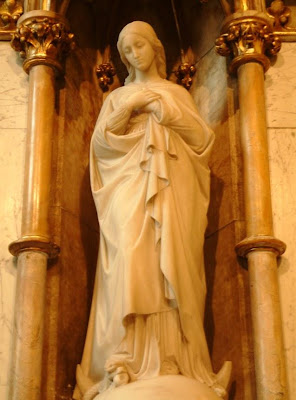 The Cathedral's Lady Chapel is, in the words of Canon Billington, 'dedicated to Mary in honour of her Immaculate Conception', the feast which is celebrated today. Contrary to popular misunderstanding, it has nothing to do with the conception of Jesus; rather the doctrine states that Mary herself was conceived without sin. Although the belief had been widely held by Catholics for a long time, it was only formally defined by Pope Pius IX in 1854, just a few years before Lancaster's new church opened. The Lady Chapel's dedication, therefore, is no surprise. In 1954, a century after the declaration, Pope Pius XII declared a Marian year to mark the anniversary, and Cathedral parishioners made a point of celebrating the feast with particular solemnity. There was a triduum - three days of prayer - which featured Mass each morning and sermon each evening. The triduum ended with the feast itself, on which day around 370 people took part in a torchlight procession, followed by Pontifical High Mass sung by Bishop Flynn. Such events give us a glimpse of the popular piety which has always been a part of the life of St Peter's parish, and indeed the Church more widely.

Posted by Canon Billington at 6:51 am