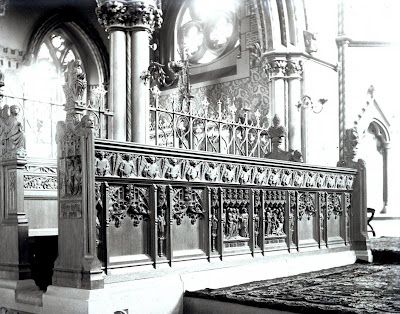 The choir stalls were first used on this day in 1899. As can be seen in this image, they originally consisted of two benches on each side; the ornate backs which today carry the shields of former bishops were added later, in 1928. Canon Billington devotes a couple of paragraphs to these stalls, giving details of the carved images, which show scenes from the life of St Peter, the symbols of the four evangelists, the four 'Latin Doctors' of the Church (Sts Ambrose, Jerome, Augustine and Gregory the Great) and various other saints, mostly with strong connections to Britain. Canon Billington records that the stalls cost around £700, and "were designed by Austin and Paley, and the principal carving was done by R. Bridgeman of Lichfield. They were placed there in 1899, being used for the first time on Sunday, December 24." When St Peter's was raised to cathedral status in 1924 the stalls took on a new role as home to the Cathedral Chapter. You can read a little more about this in an earlier post, here. Aside from the stalls, the image above contains a couple of other noteworthy features: it appears that at this early stage the sanctuary was carpeted (presumably this remained so until the jubilee alterations of 1909) and we also get a glimpse of the original decoration of the Lady Chapel, seen behind the stalls. As ever, you can click on the image for a larger version.

Posted by Canon Billington at 6:54 am