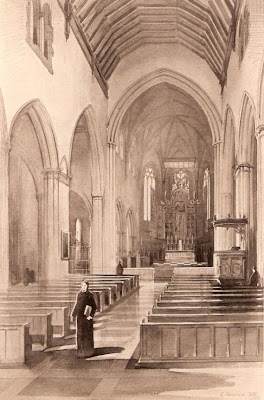 These images show the Cathedral as it appeared in 1909, following the alterations made for the Golden Jubilee. It was on this day, 30th September, that the Golden Jubilee celebrations began. The great changes that were made, along with the celebration itself, were overseen by our own Canon Billington, who was rector at the time. His book devotes a whole chapter to the event; here are a couple of extracts: "To mark the fiftieth anniversary of the consecration of the church, considerable alterations were made, all tending to the greater beauty of the building and the convenience of the congregation... they may be summarised here as the provision of a new high altar with fine reredos and triptych; new flooring for the chancel, aisles, chantries, and passages of the nave and aisles; new benches all through the church, new doors, and a screen for the west door, the recolouring of the walls, the decoration of St. Charles's altar, and minor changes. During the alterations, which occupied many months, the services of the church had to be somewhat curtailed, and were conducted at much inconvenience to the clergy and the people, but the result has caused all that to be forgotten." 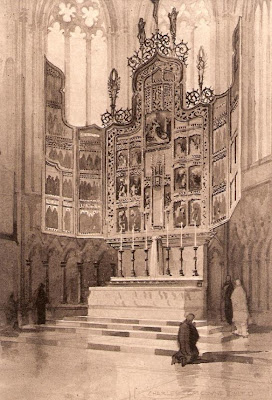 Here is the new high altar referred to. It was consecrated on 1st October, but the ceremonies for the jubilee began the previous evening: "The celebration began on Thursday evening, September 30, with the veneration of the relics of SS. Urban and Valerian, which were to be deposited in the new altar. The relics, enclosed in a suitable casket, were placed on the altar in the baptistery, and the night office of 'many martyrs' was recited there. Those present were the Bishop of Liverpool [Thomas Whiteside], Canon Billington and the other clergy of St. Peter's, Mgr. Gillow of Kirkham, Dean Crookall of Douglas, Isle of Man, and the Rev. R. J. Langtree of Grange."