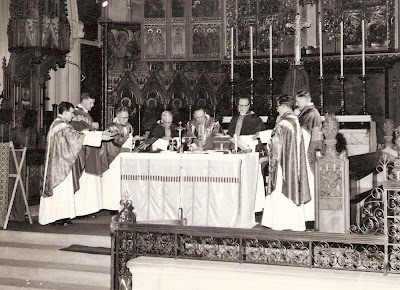 Among the liturgical reforms that emerged following the Second Vatican Council (1962-65) was the possibility of concelbration at Mass. In this way each priest is understood to offer the sacrifice of the Mass even if he is not the principal celebrant. Although concelebration is a long-established practice in the eastern rites, it has no history in the Latin liturgy and its introduction inevitably brought with it some practical problems. This photo shows an early concelebrated Mass in the Cathedral sometime in the 1970s; Bishop Foley is presiding. Notice how the priests are not in matching chasubles; there would have been no sets of multiple vestments before the reforms. Another issue was space: sanctuaries in churches were not designed for large numbers of priests. See here how the priests are fairly tightly gathered around the temporary altar that was in use at the time. In the Cathedral space was a particular problem, especially at large gatherings such as the annual Chrism Mass. No solution was found until the 1995 reordering, when the construction of a new sanctuary at the transept crossing allowed priests to gather in the transepts for these large celebrations.

Posted by Canon Billington at 6:29 am