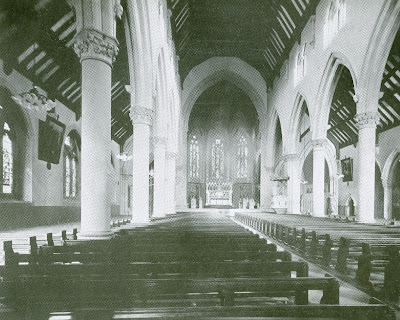 Slightly out of season, some might say, the original Stations of the Cross were first used 148 years ago today. Canon Billington: "The Way of the Cross was formally inaugurated on December 19, 1861. The Stations then acquired were bought in Paris, the cost in all being under £200. Twelve of them were subscribed for by Miss Jenkinson, Mrs. G. and Miss Coulston, Joseph Coulston, Misses M. and E. Coulston, Mrs. John Coulston, Mrs. John Whiteside, Mrs. Margaret Leeming, Miss M. Leeming, Mr. Richard Leeming, Mr. Hewitt (the Veronica)[this implies that Mr Hewitt payed for the sixth station: Veronica wipes the face of Jesus], Mr. J. Birchall, and Mr. H. Verity. Apart from this, subscriptions came in liberally, and the surplus was spent on the statues of St. Peter over the north doorway. For the jubilee the paintings were reframed in oak and hung in somewhat more convenient positions." In the image above two of the stations are clearly visible in their original positions: one between the windows on the left hand side of the picture, and one on the right hand side near the top of the aisle. 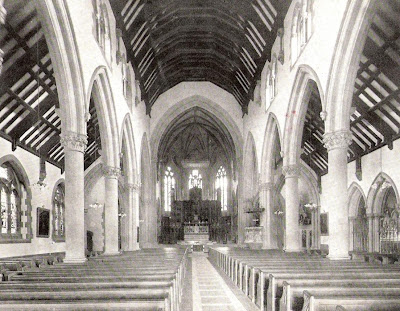 This image, taken after 1909, shows the same stations rehung, in accordance with Canon Billington's description. It seems that 'somehat more convenient positions' may simply imply 'lower down on the wall' - presumably this made them more easily visible. The stations were used until the late 1950s, when they were replaced in preparation for the church's centenary; a post on the new stations can be found here.