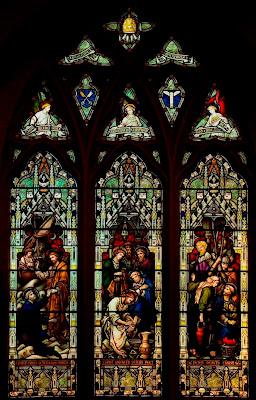 This window is the second in a series of four which run along the north aisle and depict the life of St Peter. It was given by Margaret Coulston, in memory of her sister Elizabeth, who died on this day in 1893. The other three windows are also given in memory of the dead, though no inscription is found in the church itself. The first window was given by Mr Robert Preston in memory of Dean Brown, the third formed part of the memorial to Provost Walker, and the final window was given by members of the Leeming family in memory of Richard Leeming and his wife.

Posted by Canon Billington at 7:15 am