Another view of Dalton Square 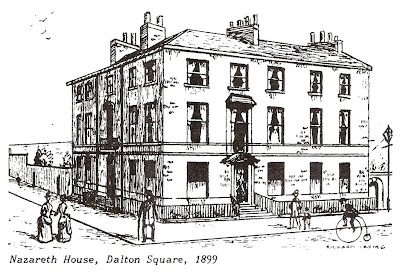 An earlier post showed an image of the Coulston's house in Dalton Square, which was used by the Sisters of Nazareth 1899-1902. Here's another view of the same house, which - as can be seen - had doors onto both Dalton Square and Robert Street. It's very revealing to compare the census returns around the turn of the twentieth century. In 1891 (address listed as 2 Robert Street) lived Margaret Coulston and her sister Elizabeth; two visitors and three servants are also listed. In 1901 (address given as Nazareth House, Dalton Square) there were Sister Mary Ronan and six other nuns plus a further five men, nine women and 41 children in residence - a total of 62 people. It is perhaps unsurprising that they soon looked for another building to occupy!

Posted by Canon Billington at 5:42 am