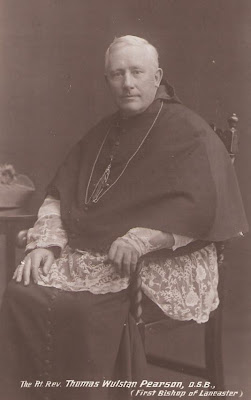 Lancaster's first bishop, Thomas Wulstan Pearson, died on this day in 1938. A native of Preston, he had been educated at Douai and joined the Downside community of Benedictines in 1887. He remained there until 1912, when he was appointed assistant priest at St Mary's church, Highfield Street, Liverpool. Four years later he was appointed Prior at Ealing Abbey in West London, though it appears that he was unhappy with this appointment and made several requests to be allowed to resume pastoral work. Greater responsibility was laid on his shoulders when he was ordained Bishop of Lancaster in February 1925 (see here), a post which he held until his death. 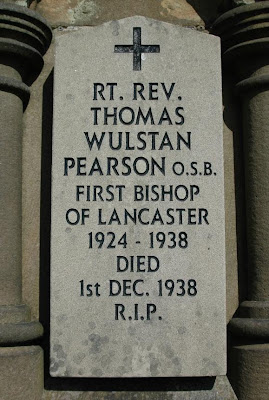 The notice book entries for 1938 list the Bishop as being ill from around the end of October, and his death is announced in the entry for 4th December. An announcement of the funeral was made as follows: "The body of His Lordship will arrive at 4pm and will lie in state until 7pm. The Solemn Dirge will be sung by Archbishop Downey [of Liverpool] on Monday at 11am. The clergy will occupy the choir benches in the nave; some benches will be reserved for the mayor and relatives etc. The rest of the nave and side aisles will be for the general public. The funeral will take place in our own cemetery." So it was that Bishop Pearson became the first to occupy the vault which now contains the bodies of all the deceased bishops of this diocese to date. 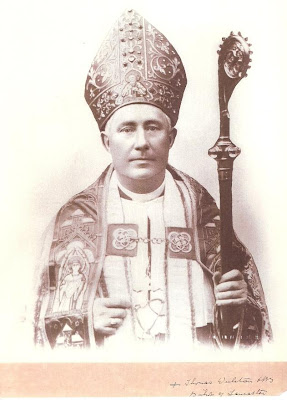 A glance at the list of Mass intentions reveals that at least ten Masses were offered in the Cathedral for the Bishop in the week of his funeral. He had served the Diocese well, overseeing the events of its foundation, which must have been an enormous administrative task. During his episcopate he opened a number of new churches and parishes around the Diocese, including St Thomas More's, founded from the Cathedral.
Posted by Canon Billington at 6:32 am