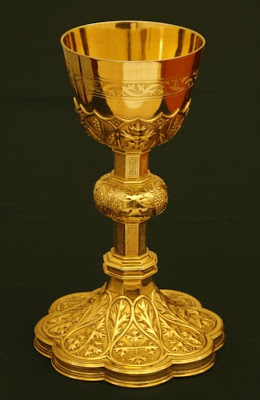 On this day in 1892 a parishioner of St Peter's, Helena Leeming, daughter of Richard Leeming who bought the church's pipe organ, made her solemn profession in the Carmelite monastery at Lanherne, Cornwall. She had left the parish in June 1891, shortly after the deaths of her parents, and had inherited a substantial sum from them. In Carmel she took the name 'Sister Mary Joseph of the Blessed Sacrament'. As a parting gift to the parish, she left this chalice, which is still in use and was the principal chalice used at the Cathedral during the 2009 visit of the relics of St Thérèse of Lisieux, the famous 19th century Carmelite. 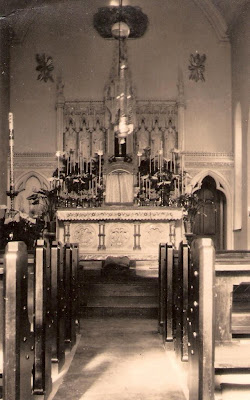 She disposed of her fortune by giving liberally to many charities, and she also donated the altar in the chapel at Lanherne, which is seen here in a photograph taken in 1937. The Carmel's archive records, "Not so many years after Sister Mary Joseph's profession, her health began to decline. She contracted a form of TB and later cancer. After suffering with great patience and courage, she died very peacefully on 3rd June 1911, and was buried in our private cemetery inside the enclosure. The monastery closed in 2001, and the community merged with that at St Helens; we are grateful to Reverend Mother Prioress for sending us information from the archive and the image of the altar. When the Carmelites left, some contemplative Franciscan sisters moved into the convent, so thankfully it is still home to a religious community and the altar is still in use. You can read a little about the community that is there today, and see a more modern picture of the altar, by clicking here.

Posted by Canon Billington at 6:39 am