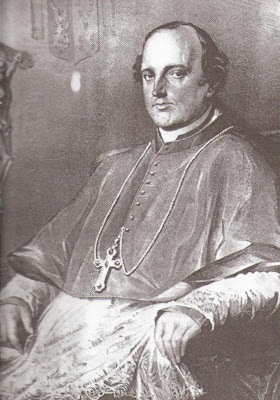 Rt Rev. Alexander Goss, the second Bishop of Liverpool, died on this day in 1872. Born at Ormskirk, he was educated at Ushaw and the Venerable English College, Rome, where he was ordained priest in July 1841. In 1853 he became coadjutor Bishop of Liverpool (alongside George Brown) and he took over the Diocese on 25th January 1856. For St Peter's he was an important figure: it was he who consecrated the church on 4th October 1859; he also consecrated many of the side altars. He was present at the funeral of Dean Brown, the founder of this church, and appointed Provost Walker as Brown's successor.

Posted by Canon Billington at 7:11 am