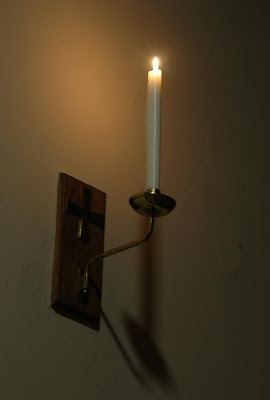 Around the walls of the Cathedral there are candles; these mark the places where, on this day in 1859, Bishop Alexander Goss anointed the walls of the new church with oil. The Cathedral Church of Lancaster, as it became in 1924, is today 150 years old. Given the great crowds that will come to celebrate the anniversary today, it seems strange that in 1859 only a small number were allowed to be present (Canon Billington will explain!). Sadly, there are no know photographs of the event and Canon Billington's account of the day is surprisingly brief: "The ceremony of consecration, lasting over four hours, took place on Tuesday, October 4, 1859, Bishop Goss officiating. As it requires the floor space of the building to be kept clear, the people are not admitted to it as a body. The new church of St Peter, Prince of the Apostles, wsa opened for public worship on the following Thursday, with pontifical high mass." The account then gives a fuller desciption of this event, which we will share in due course. One signifcant fact about this day is very striking: it is not permitted to consecrate a church that is yet to be fully paid for. Therefore every penny (indeed every farthing) towards the building of the church had been paid off before it was ever opened to the public. The people of Lancaster had paid for their new church. If you'd like to know more about the consecration ceremony, a blog from Westminster Cathedral has details and images of its consecration in 1910 (the rite of consecration would be largely unchanged between 1859 and that time); you can find the post here.

Posted by Canon Billington at 6:01 am