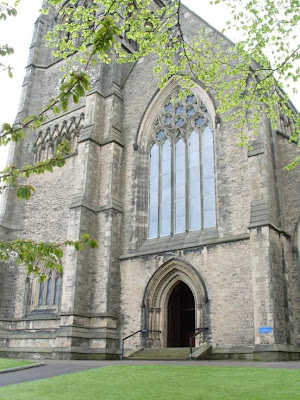 It was on this day in 1859 that the new church of St Peter was first opened to the public. Canon Billington gives a fairly lengthy description of the proceedings, recording that High Mass was celebrated by Bishop Goss, with Bishop Turner of Salford and Bishop Briggs of Beverley also attending. Haydn's Imperial Mass was sung. Dr Roskell, the Bishop of Nottingham, preached on the words, "Go, make disciples of all the nations, baptising them in the name of the Father, and of the Son, and of the Holy Ghost" (Matthew 28:19). After Mass the Te Deum was sung. Billington notes, "The music was conducted by Mr. Gustave Arnold, a former organist; he brought a full orchestra from Manchester. Mr. Schmitz was organist." There is some evidence - though as yet no proof - to suggest that the orchestra referred to was Manchester's famous Hallé orchestra, which had recently been established. After Mass there was "a luncheon in the schoolroom", presided over by Mr. R. T. Gillow of Leighton Hall. There were toasts to the Pope, the Queen, the bishops, Dean Brown, the architect and the ladies. Canon Billington tells us, "Bishop Goss in his speech congratulated the people of Lancaster upon having raised 'one of the most glorious works of the present age' without appeaking to external aid." Dean Brown himself spoke of the great generosity of the people of Lancaster, of how he had desired only the best for the new church, and of the purpose of the building's grandeur: the honour and glory of God. He also thanked those who were not of the Catholic faith and yet had "given help or shown favour" towards the building of the new church.
Posted by Canon Billington at 6:30 am