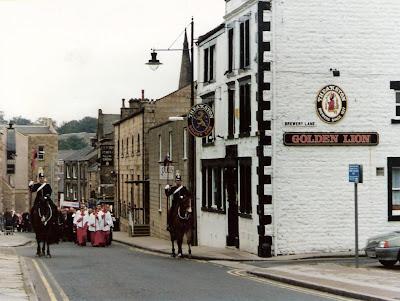 Thirteen years ago the memorial to the Lancaster Martyrs was blessed. It was almost exactly 350 years since the last of the martyrs had been put to death. 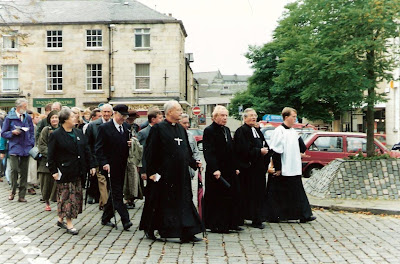 The event included representatives of other denominations, including the local Anglican suffrigan bishop, a local Methodist leader and representatives of the Society of Friends. Crowds gathered in Dalton Square, from where Bishop Brewer and the other religious leaders led the way. 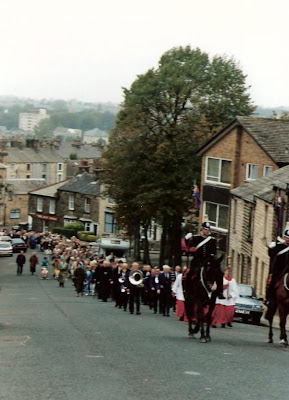 Mounted police cleared the road ahead of the procession; a brass band is also visible in this picture. 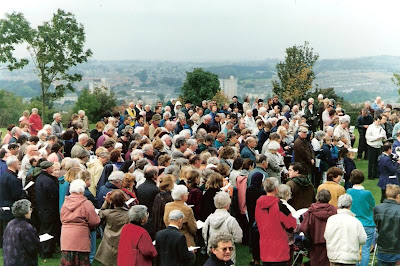 A crowd of several hundred people gathered for the event, which had something of the spirit of the earlier hugely popular martyrs' rallies. 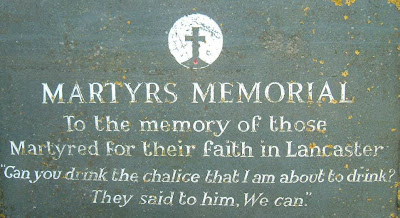 Today the memorial still stands on the hill above the Cathedral. Each year on 7th August - the feast of the Lancaster Martyrs - prayers are said around it. The site for the memorial was chosen after much historical research carried out by Lancaster University students Susan Anderson and Peter Williamson, under the supervision of Dr Mike Mullett. Bishop Foley, who had a noted interest in local Catholic history, was also very involved. It appears that different executions were carried out in this area but not always on the same site; a number of places in the locality appear to have been used.
Posted by Canon Billington at 6:25 am