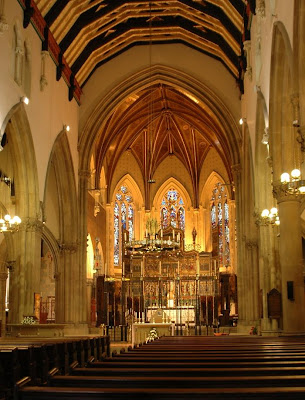 Just ahead of the date of the Cathedral's consecration, today Billington's Blog features a few words about the 1995 reordering of the Cathedral. The work has already been featured in some earlier posts; today we briefly look at its completion. The Cathedral was rededicated and the new altar reconsecrated on 4th October 1995 by Bishop John Brewer; the church was packed with representatives from around the Diocese of Lancaster, along with eight bishops and over 100 priests. The Apostolic Delegate was also present, representing the Pope. The restoration work, masterminded by Preston architect Frank Roberts, met with great critical acclaim. It included the creation of a new sanctuary at the transept crossing; in this sanctuary were a new altar, ambo and cathedra, and above the altar a corona lucis was installed. The 1909 triptych, which for many years had been removed to other parts of the church, was returned to the east end of the Cathedral. 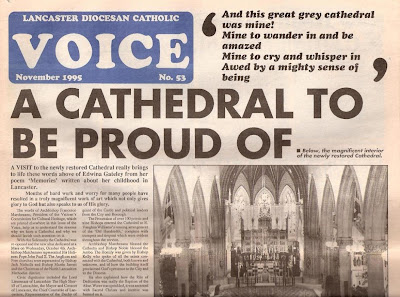 The diocesan newspaper, the Catholic Voice, led its November 1995 edition with the reordering, under the title "A Cathedral to be proud of". Indeed it was an occasion for congratulation around the whole Diocese of Lancaster, throughout which a great fundraising campaign had taken place to secure the £250,000 needed for the work; a grant from English Heritage also made a significant contribution. The restoration work was undertaken at the request of Bishop Brewer and the Cathedral Chapter, and was overseeen by the Administrator at the time, Canon Patrick Mulvany.

Posted by Canon Billington at 6:46 am