A view from the Square I 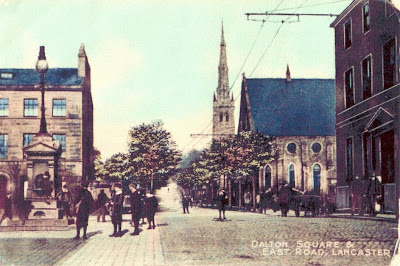 This image shows the view from Dalton Square as it would have appeared at around the turn of the twentieth century. St Peter's (not yet a cathedral, of course) is clearly visible further along East Road, and the Baptist Church on Nelson Street, which had only recently been built, can also be seen. Among the items which have disappeared are the tram lines and the house to the right of the picture. This belonged to the Coulston family, and was used as Nazareth House when the Sisters of Nazareth came to Lancaster in 1899. The house was demolished to make way for the Town Hall, which opened in 1909.
Posted by Canon Billington at 7:01 am