On this day in 1861 the original high altar of St Peter's church was consecrated. It served the church until 1909, when it was replaced by the new altar, reredos and triptych. Canon Billington tells us about the origin of the first altar: "The old high altar, the gift of Mrs. Gabriel Coulston, was the work of Stirling of Liverpool. The table was a slab of veined marble supported by four pillars of Devonshire marble which rested on a granite base." The altar is here seen in its original position in St Peter's. 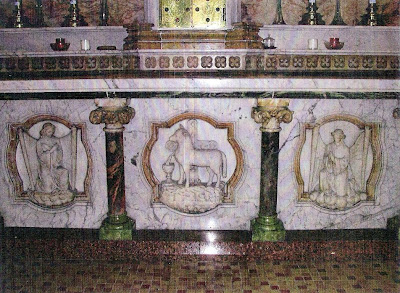 This close-up is a modern photograph of the altar, which is currently in storage in the care of the Archdiocese of Liverpool. Canon Billington describes the panels: "The lower part of the altar was divided into three panels; the centre had a carving representing the Lamb of God shedding His blood for men, and the side pieces showed ministering angels with outspread wings. The altar was consecrated on October 9, 1861, by the Bishop of Liverpool [Dr Alexander Goss]." 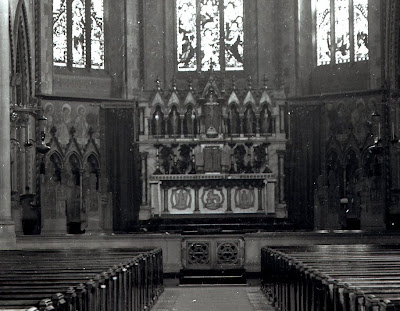 To accompany this picture, which again shows the altar in its original position, a few more words of Canon Billington's description: "the upper half was arcaded in a simple manner, the niches being filled with statues of Saints Peter, Paul, Cuthbert, William, Wilfrid, and Oswald, these four being the most prominent of the saints of northern England. In the centre there was a tabernacle of marble with ornamental brass doors; above stood the throne, having a pinnacled canopy of alabaster." 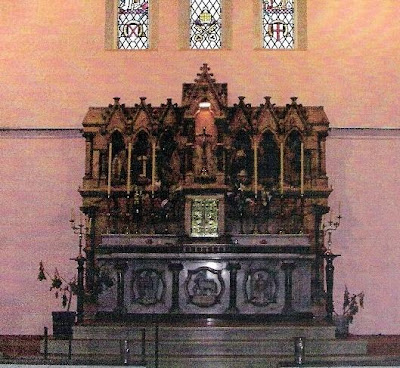 After 1909 the altar was moved: "This altar has been given to the church of St Malachy, at the south end of Liverpool." The parish referred to was in the Toxteth area; it had opened a few years earlier, in 1900. Sadly it was closed in 2001, and the altar, as previously noted, is now in storage.
Posted by Canon Billington at 6:49 am