William Leeming and the Pulpit 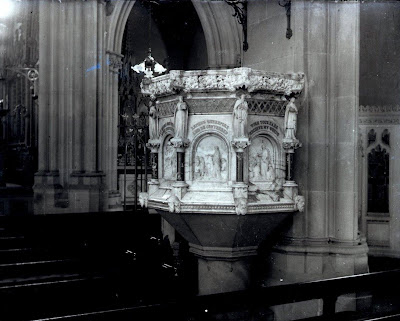 William Leeming, who donated the pulpit died on this day in 1912. He had been born in 1827 and was the younger brother of Richard Leeming, donor of the church organ. Canon Billington writes: "In the nave proper one of the ornaments is the pulpit, which stands on the south side against the western pier of the transept arch. It was the gift of Mr. William Leeming, now of West Derby near Liverpool. The body is of light veined marble, semi-octagonal in shape, with four dark-coloured marble shafts on the corners, on each of which stands a white alabastar figure of one of the evangelists." The pulpit is pictured above, in its original position. The image here also gives a rare glimpse of the Pugin arcading which previously surrounded the Sacred Heart altar. 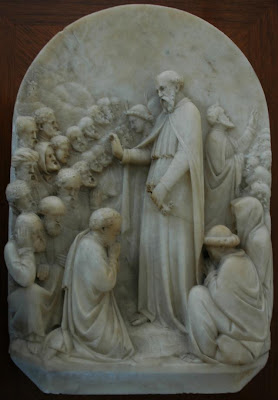 Sadly the pulpit was removed and seemingly destroyed in the 1970s; all that is known to remain is this one panel, which is still in the Cathedral's possession. It is one of four scenes which Canon Billington describes in his book. This appears to be the first scene, that of "St Peter and the other apostles preaching on the day of Pentecost".

Posted by Canon Billington at 7:04 am