1830: The ordination of Richard Brown 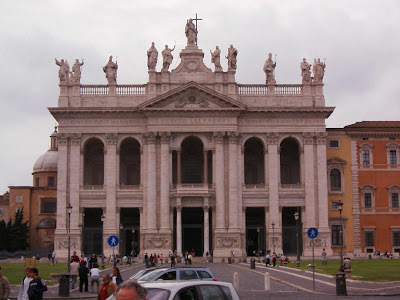 This is the Lateran Basilica, the Cathedral Church of Rome. It was here, on this day in 1830, that a certain Richard Brown was ordained to the priesthood by the Patriarch of Constantinople. He was the nephew of Rev George Brown, at that time rector of the Lancaster Catholic mission, who went on to become the first Bishop of Liverpool in 1850. Fr Richard Brown worked in Poulton, Leeds, Kilvington, Whitby and Dukinfield. There, in Billington's words, he "caused the church, presbytery, and schools at Stalybridge to be built." Ten years after his ordination he went on to run the Lancaster mission, and oversaw the building of the present St Peter's church. His character is described by Canon Billington: "He was severe with himself and austere in his manner to others, but the flock knew a faithful pastor... He was regarded as 'a man of great culture, with a taste for archaeological and architectural studies which had been developed and enriched by his residence in Rome'." He adds, "No portrait of him is known; he refused to have one taken." Canon Billington is not slow to praise Fr Brown; he begins his account with the sentence, "The Rev. Richard Melchiades Brown, to whose zeal and self-sacrifice St. Peter's, with the house, convent, schools, and cemetery form a noble monument, deserves a more extended notice than the scanty records available admit."