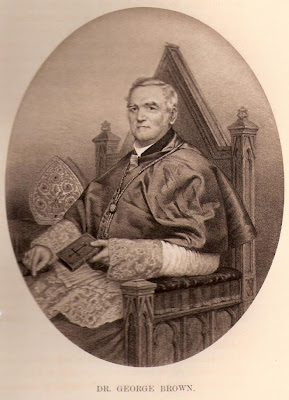 14th January 1786: the Birth of George Brown
George Hilary Brown was born at Clifton in the Fylde on this day in 1786. He was educated at Ushaw College, Durham, where he was ordained priest in 1810 and then taught theology. In 1819 he was appointed rector of the Lancaster mission, based at the chapel in Dalton Square. Dr Brown was appointed Vicar Apostolic in Lancashire in 1840 and consecrated bishop on 24 August 1840 in Liverpool. Before 1850 the Church in England was overseen by Vicars Apostolic appointed by the Pope; Bishop Brown became the first to oversee Lancashire. It appears that his appointment was not universally popular; he was often absent from his duties and when present he seems to have possessed the ability to upset his priests. Even Dr Lingard, the priest and historian at Hornby, who was well disposed towards him, seemed suspicious of his mystery illnesses, recording that he was like a walking shadow, unable to say Mass, trembling like a man of ninety, seemed to have little hope of surviving, "and all this with a good appetite". Following his appointment he remained in charge at Dalton Square until 1841, though in 1840 the practical running of the mission was handed to his nephew Richard Brown, who would later build the present church. The list of priests in the Cathedral records the overlap. 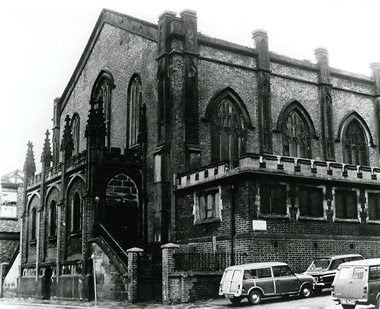 In 1850 the Catholic hierarchy of England and Wales was restored, and Dr George Brown was appointed first Bishop of Liverpool. St Nicholas' Church, Copperas Hill, Liverpool (pictured), was chosen to act as pro-Cathedral until a new cathedral could be built. It remained in this role until the Metropolitan Cathedral opened in 1967; St Nicholas' was then demolished in 1973. Bishop Brown's new diocese covered a vast area: not only Liverpool but large parts of Lancashire, including Preston, Lancaster and towns as far north as Barrow-in-Furness. He established a number of schools and institutions for the sick and those in poverty, while overseeing a great expansion in the number of Catholics. His time as Liverpool's first Bishop would be fairly brief, however. He fell ill in 1853 and died on 25th January 1856. In the absence of a permanent cathedral he was buried at St Oswald's, Old Swan. His successor, Dr Alexander Goss, was the bishop who consecrated St Peter's, Lancaster, in 1859.

Posted by Canon Billington at 8:23 am