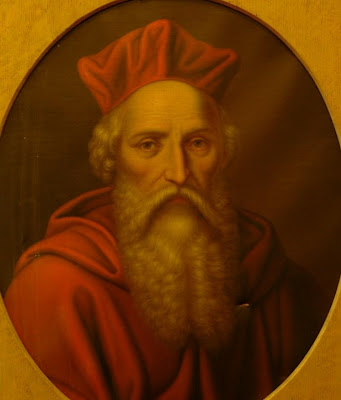 This portrait of Cardinal William Allen, who died on this day in 1594, hangs on the wall in Cathedral House. He was born near Fleetwood in 1532. After having refused to take the 1559 Oath of Supremacy, he sought refuge in England but eventually had to flee to the continent in 1565. Soon afterwards he was ordained priest. He is one of the most significant figures of the counter-reformation, as he worked to found seminaries for the training of English priests on foreign soil. In 1568 he established the English College at Douai, and later assisted in the foundation of the Venerable English College in Rome (1575) and the English College at Valladolid (1589). These last two foundations are still used for the training of priests, while Douai, which closed in 1793 as a result of the French Revolution, is the origin of the colleges at Ushaw (Durham) and Allen Hall (Chelsea). Pope Sixtus V made Allen a cardinal in 1587. Cardinal Allen's legacy cannot be overestimated: he provided the colleges which trained many of the priests who kept Catholicism alive in England during the years of persecution (including many of the martyrs). More recently, most of the priests who have served the Cathedral owe their formation to a seminary founded by him.

Posted by Canon Billington at 6:42 am