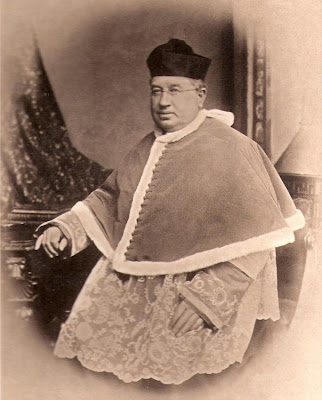 On this day in 1849 William Walker, the second rector of St Peter's Church, was ordained priest at Ushaw College, Durham. He had been born at Layton Hall near Blackpool on 2nd August 1820 and went to study at Ushaw when aged 15; after his ordination he remained there for a further seven years as professor of humanities, poetry and rhetoric (in succession).He was then given charge of St Augustine's, Preston, where he remained until coming to St Peter's in January 1869. He was made Provost of the Chapter of Liverpool (in which Diocese Lancaster then was) in 1889. The image of him here is taken from Canon Billington's parish history, which also gives some information about the contribution which Provost Walker made: "He continued the work of his predecessor [Dean Richard Brown] in beautifying St. Peter's Church and increasing its usefulness, for he too loved the beauty of God's house. He published little guides on the occasion of the blessing of the bells and the opening of the great windows in transepts and nave. The schools were enlarged by him in 1878; a former pupil teacher, George Sergeant, was ordained priest in St. Peter's in 1891. Provost Walker was a man of culture and genial manners, very popular among his brother clergy and his flock, and in general esteem with non-Catholics; he was generous to a fault, impoverishing himself that he might give to others." Canon Billington, who succeeded Provost Walker as rector of St Peter's, also records that Provost Walker "served on the burial board and the Infirmary Committee, and in other ways took part in local movements."

Posted by Canon Billington at 6:40 am