1946: The Visit of Cardinal Griffin 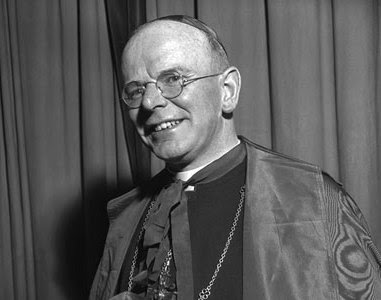 On this day in 1946 Cardinal Bernard Griffin, Archbishop of Westminster, visited Lancaster. It was one of the most important events yet for Catholics in this city, not least because the Cardinal was received with a warm welcome at the Town Hall. A letter from the Town Clerk advises councillors: "The Cardinal will appear in robes, and accordinly the Mayor would be glad if members of the council would robe and wear any badges or decoration to which they are entitled." Cathedral parishioners were also being encouraged to turn out in force, as details of the visit were given - so the notice book entry for 20th October 1946: "Friday is a great day for the Catholics of Lancaster. His Eminence Cardinal Griffin will be received by the Mayor and Corporation at the Town Hall at 11:30am; the Cardinal will come out to speak to the children at 11:45am and will return home at 12noon. If wet, the Cardinal will address the children in the Ashton Hall. Since this is a great event for us, we hope that as many Catholics as possible will assemble at the Town Hall on Friday at 11:15am - adults will be placed on the Town Hall steps, if they wish. The children will be arrayed in front of the Town Hall. Let this be a real Lancashire welcome for the Cardinal; let him see what the Catholics of Lancaster can do, when a Prince of the Church pays a visit to the city." The following week the notice book suggests that everything had gone well: "His Eminence was very much impressed by the welcome which you gave him, and begs to thank you for your grand reception. You responded to the appeal and proved yourselves worthy of the Cathedral and Lancaster. The children were really marvellous and the singing was impressive. A big thank you to all those who took part in this affair and who helped so willingly to make it so great a success."

Posted by Canon Billington at 6:57 am