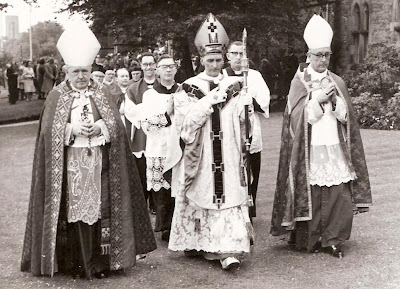 Newly ordained to the episcopate, Lancaster's third Bishop steps out onto the lawn outside Cathedral House. Rt Rev. Brian Charles Foley had been a priest of the Diocese of Brentwood before being appointed Bishop of Lancaster. It was on this day in 1962 that his episcopal ordination took place. He presided over the Diocese for over twenty years, overseeing the opening of many new parishes and being present at the Second Vatican Council. After his retirement in 1985 he continued to live in the Cathedral parish and was notable in retirement for visiting the sick and housebound. He had a keen interest in the past and wrote a number of books on local Catholic history. He died in December 1999, just a few months before the death of his successor, Bishop John Brewer. 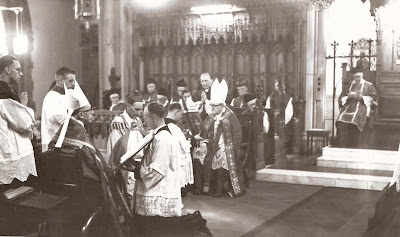 Bishop Foley was consecrated by Archbishop (later Cardinal) Heenan, who at that time was the Archbishop of Liverpool. The co-consecrators were Bishop George Beck of Salford (who later succeeded Heenan as Archbishop of Liverpool) and Bernard Wall, the Bishop of Brentwood. In the picture here Bishop Foley is seen kneeling in the sanctuary; the canons are in the choir stalls, and the cathedra which he was to occupy can be seen in its original position on the far right of the picture. We are grateful to Fr Gerard Dakin for the loan of these pictures; he himself is visible on the far left of this image, while stood behind the seated bishop on this side may be seen Monsignor Shaun Monaghan, who died last year.

Posted by Canon Billington at 6:45 am