Centuries ago it had been a walk of shame and of torment, a route that led to death. For many decades in the 20th century, however, it became a walk of triumph. This is the route that the condemned took from Lancaster Castle to the site of their execution near the present-day Ashton Memorial. Following in the footsteps of the Catholic martyrs, the faithful for many years walked along the route, forming a great procession in the martyrs' honour. 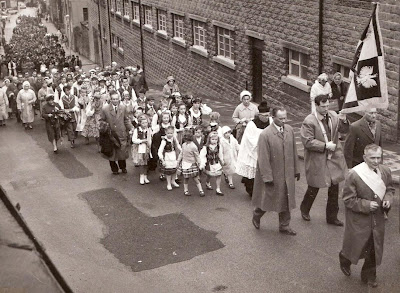 All ages and groups took part in the processions,and people came from across the Diocese. One such rally took place on this day in 1963, and reports suggest that as many as 8000 people attended. The notice book entry for 27th June 1926 speaks of a party of 700 coming from the English Martyrs Church, Preston, to take part in the procession. The route for that day (and presumably for other years) is described thus: "We shall start from the Castle at 3.30 prompt and shall walk in procession saying the Rosary and other prayers, by way of Market Street, Stonewell, Moor Lane, Moorgate and Quernmore Road, to the open ground beyond the workhouse. There the hymn to the English Martyrs will be sung. Then the procession will return via East Road to the Cathedral, where there will be a sermon on the English Martyrs followed by Pontifical Benediction." 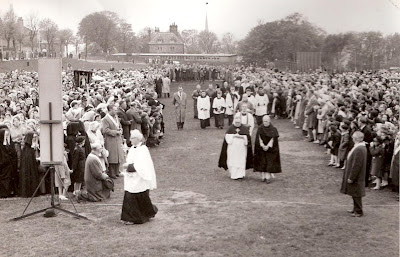 Although this extract from 1926 indicates a return to the Cathedral, it seems likely that on most occasions (particularly in later years when public address systems became available) the procession ended with a service at the execution site itself. Many of these rallies would have included prayers for the canonisation of the English Martyrs; this hope became a reality in October 1970 when Pope Paul VI canonised 40 martyrs of England and Wales, including two executed at Lancaster (St Edmund Arrowsmith and St Ambrose Barlow). It is a sad fact that after the canonisations interest seemed to wane; more recently there have been the beginning of attempts to revive devotion to the martyrs, and in 2007 a feast of the Lancaster Martyrs was institued within our own Diocese. It is celebrated on 7th August.

Posted by Canon Billington at 7:52 am