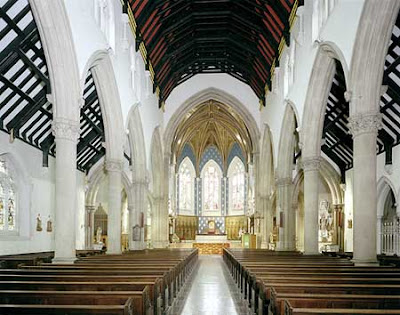 This image has survived in the Cathedral archives. It was believed that the picture showed the church sometime in the 1980s, though in fact a keen-eyed blog reader has tracked down the source of this image, which - it turns out - was taken in July 1994. It gives a good impression of how the Cathedral looked just before the 1995 reordering. Most of the walls have simply been whitewashed, giving the building a much less colourful feel than did the earlier - and later - decoration. Thank you to John Rogan for his input and observation skills!
Posted by Canon Billington at 8:20 am