For the Canonization of the Martyrs 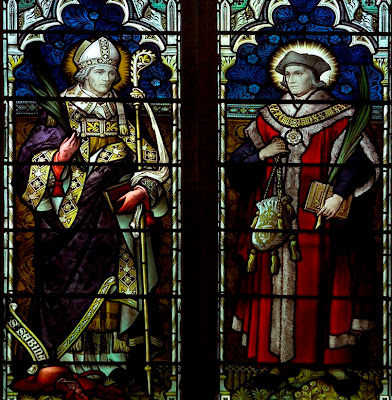 On this day in 1935 Cathedral parishioners were praying for the canonization of two English martyrs: Blessed John Fisher and Thomas More, depicted here in the Cathedral's English Martyrs Window, which was already in place. The notice book for the previous Sunday (20th January 1935) announced the event: "Next Sunday - day of intercession for the canonization of Bl. John Fisher and Thomas More - Masses 7.30, 8.30, 9.30 & 11.0 - this sung by His Lordship the Bishop - General Communion for the parish. Exposition after 11.0 Mass until evening service, when there will be procession of the Blessed Sacrament, in which Men's Sodality, Children of Mary & Guild of St Agnes will walk." The two martyrs were, in fact, canonized later that year. 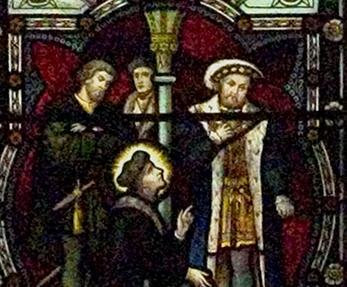 The English Martyrs window also features an image of King Henry VIII, who had both Fisher and More beheaded in 1535, four hundred years before their canonisation. The notice book contains another announcement following the request about the martyrs, this one referring to transport for the parish: "We regret that only 15 names were given for a bus service on the Marsh - this matter will be suspended for the time being. We are pleased to say that the traffic manager will begin the new bus service from Scotforth and Bowerham next Sunday 27 Jan - times of buses in the church porch." Scotforth and Bowerham would be served by a new parish, St Bernadette's, in due course, while the Marsh would have its own new church just two years later. Its patron? St Thomas More.
Posted by Canon Billington at 8:09 am