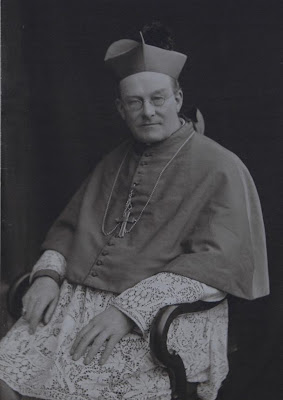 On this day in 1921 Thomas Whiteside, first Archbishop of Liverpool, died suddenly at the age of 63. Seemingly he had worked himself to death, being a most diligent bishop and one who was reluctant to delegate any duties. At the time the city of Lancaster was a part of his diocese; there is, however, a much greater reason why he is of importance to this parish. Thomas Whiteside was born in Lancaster, son of Robert and Isabella Whiteside, who lived on St George's Quay. His birth took place on 17th April 1857 - twelve days before the foundation stone of St Peter's church was blessed. He was an altar server here and attended St Peter's school before going to seminary. He was ordained priest at St John Lateran, the Cathedral Church of Rome, on 30th May 1885. In 1894 he was appointed fourth Bishop of Liverpool, and became the first Archbishop of the diocese when it was made a metropolitan see in 1911. We will meet Archbishop Whiteside again as the year goes on; he took a special interest in Lancaster, though sadly died a few years too early to see his home parish become a cathedral in 1924.

Posted by Canon Billington at 7:47 am