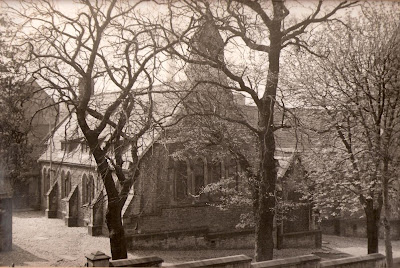 This month in 1851 the first St Peter's school on this site opened, some eight and a half years before the church. Canon Billington writes, "after some years of effort the new schools were built on the present site, and in February 1851 they were opened. After high mass in the church in Dalton Square, a procession was formed of priests, children, and congregation; and all marched with band and banners to the new building. Here the children, about 200 in number, sang the "Ave, Maris stella," and an address was given. Afterwards they had cake, &c., distributed to them. In the following January an infant school was opened. The cost of the land and schools was over £3300, and it was many years before it was paid off." Throughout February Billington's Blog will feature occasional posts on the school, with some interesting old photographs of school life being featured.

Posted by Canon Billington at 8:12 am