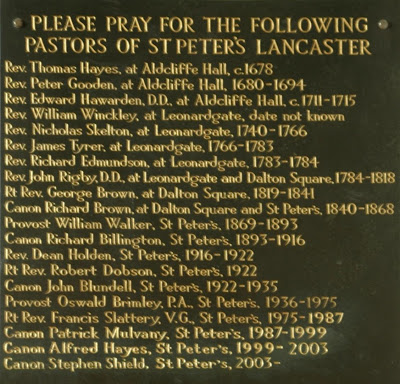 Under the bell tower may be found a list of priests who have had oversight of the parish. It traces not only the line of priests since 1678 but also the movement of the church: Aldcliffe Hall to St Leonardgate sometime in the early 1700s, then Dalton Square (from 1799) and finally in the present church from 1859. The priests have had a variety of titles over the years: 'Pastors' is a term intended to include all those who have run the church. After the formal foundation of the parish they were been known as Rectors or Parish Priests; when the church became a cathedral in 1925 the title changed to 'Administrator', and finally to 'Dean' during the time of Canon Hayes. Click on the image to see a larger version... and expect to be much more familiar with many of these names by the end of the year!
Posted by Canon Billington at 8:52 am