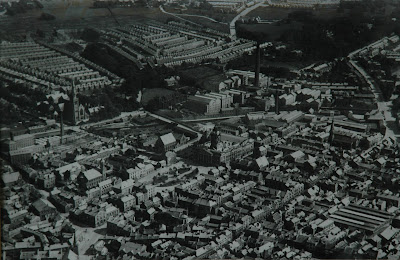 This impressive picture, which hangs on the wall of a guest room in Cathedral House, shows Lancaster sometime in the first half of the 20th century. The Cathedral can be seen to the left of the picture, close to the rows of terraced houses (clicking on the picture will enlarge it if you need a closer look). Images such as these help to put the Cathedral in its geographical context; today's post tries to do something similiar with its history. On this Blog over the next 12 months we will mark many events on their anniversaries, so one day we may be in 1859, the next in 1975, and so on. In this post, then, we provide a very brief but necessary account of the history of St Peter's in chronological order, so that readers of individual posts may get their bearings and see something of the context in which each event happened. 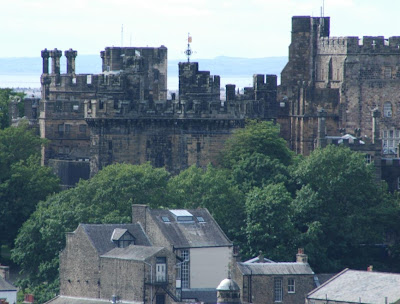 The real story goes way back, far beyond the building of St Peter's church. Canon Billington begins his account before the Reformation, writing about the Priory Church of St Mary, reminding us that before the 16th century all the churches were in full union with Rome. There were a considerable number of religious houses in and around Lancaster by this time. After the Reformation Catholics endured a time of great difficulty. Those who continued to practise their Catholic faith often suffered financial penalties - or worse. A number of priests and laymen were imprisonned in Lancaster Castle (pictured) and at least fifteen were put to death in the city. Over time the laws (or at least their enforcement) were relaxed, and by the early 18th century Catholics were gathering for Mass in a small chapel on St Leonard's Gate. In 1791 the law was changed to allow Catholics to build chapels, and Rev. Dr John Rigby set about building a small church in Dalton Square. 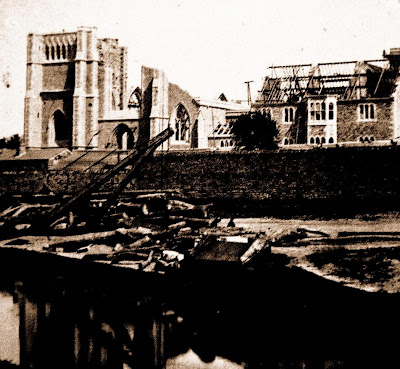 In 1829 the laws were relaxed still further, with Catholics now allowed to vote. At the same time the chapel in Dalton Square was becoming too small, and it was decided that a new church would be needed. Land was acquired in 1847, and work began. By 1853 the cemetery, school and convent had opened, and funds were being collected for the church. The foundation stone was laid on 29th April 1857, and the new church, dedicated to St Peter, Prince of the Apostles, was consecrated on 4th October 1859 by Dr Goss, Bishop of Liverpool. The Catholic hierarchy of England and Wales had been restored by the Pope in 1850, so that for the first time since the Reformation there were Catholic dioceses and cathedrals in this land. Lancaster was part of the Diocese of Liverpool, which stretched as far north as Barrow-in-Furness. 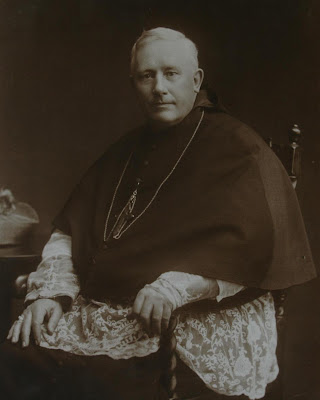 That would change in November 1924, when Pope Pius XI decided to create a new diocese centred on Lancaster. Covering the whole of Cumbria and much of Lancashire, the new Diocese took parishes and priests from the Archdiocese of Liverpool and the Diocese of Hexham and Newcastle. Thomas Wulstan Pearson (above), a Benedictine monk at Ealing Abbey, was chosen to be its first Bishop. He was consecrated Bishop in February 1925, and in the same month St Peter's became the Cathedral of the new Diocese. Since then there have been great changes in the life of the Church, changes reflected in the Cathedral building, culminating in the reordering of the church in 1995. In its 150 years many local parishes have been founded from St Peter's, and much has been done to promote the Gospel. Such is the broad sweep of history that brings us to this Blog - now, in the months ahead, we will see in more detail some of the events and some of the people that have made it all happen.
Posted by Canon Billington at 7:47 am