On this day in 1889, the new organ of St Peter's church was opened. Canon Billington takes up the story: "...the organ of Dalton Square chapel was brought to the present church and set up temporarily in the south transept, and then in the north transept, where it remained until 1888. It was then sold to St. Sylvester's, Liverpool, on a new organ and gallery given by Mr. Richard Leeming of Greaves House. The benefactor died September 22, 1888, a few months before his gift came into use, and lies in St. Peter's cemetery... The organ was built by Henry Ainscough of Preston. It is divided into two halves, so as to show the fine west window... The bellows were blown by an hydraulic engine till 1905, when an electric motor was substituted for it." 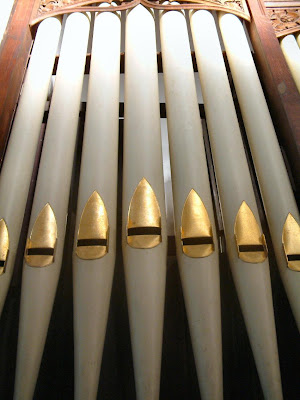 "The new organ was opened on Sunday January 6, 1889, pontifical high mass being sung by Dr. O'Reilly, Bishop of Liverpool; the sermon was preached by the Rev. R. N. Billington, then of St. Austin's, Preston, and now rector of St. Peter's. The music was that of Haydn's No. 3 Mass. At the afternoon service the bishop gave an address. There was an organ recital on the following Tuesday." 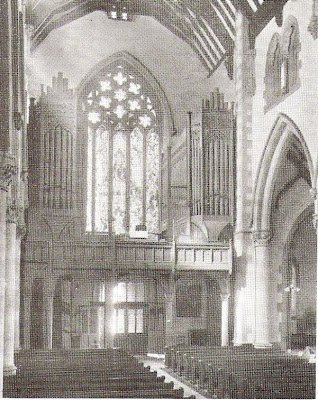 "During the jubilee celebrations (1909) an oak screen, glazed, was erected under the organ gallery around the west door. It had not been possible to use this door on ordinary occasions, because of its exposure to the usual westerly winds; it can now be used at any time. At the corners of the new screen inside the church are carved heads of the Bishop of Liverpool and Canon Billington, the work of Mr. Caleb J. Allen of Lancaster." The screen was replaced by the current arrangement in 1975. Seemingly the carved heads were lost!

Posted by Canon Billington at 7:59 am