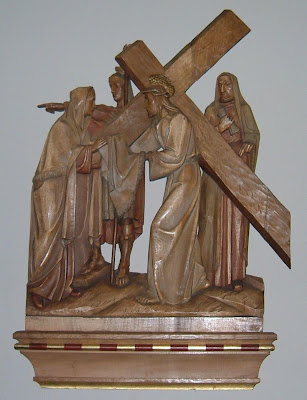 At this time of year back in 1957, the walls of the Cathedral were being prepared for new Stations of the Cross to be installed, as this extract from the Notice Book, dated 5th January 1957, reveals: "The Stations of the Cross have arrived. But it will be necessary to prepare the walls before placing them in position. This may take a few weeks." The stations installed in 1957, including the one pictured above, are still in use today. 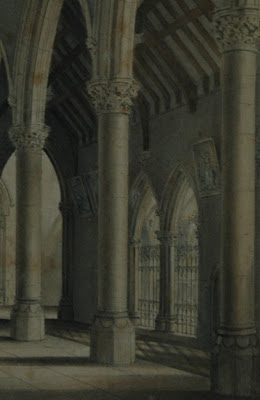 They replaced some larger stations painted on canvas, which had originated in Paris. This picture appears to show them in position, high on the walls either side of the Whiteside chantry. Seemingly these older stations were taken to the Castle for use there, though what happened to them beyond that is now unclear.
Posted by Canon Billington at 7:29 am