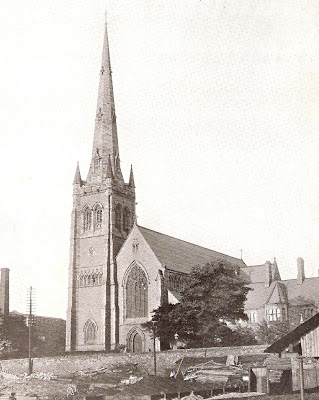 On this day in 1895 Edward Paley, architect of St Peter's, died. Canon Billington writes, "The plans [for the church] had been drawn up by Mr. Edward Graham Paley of Lancaster, who took a special interest in this church, which is by many considered to be his finest work. Mr. Paley was born at Easingwold in Yorkshire in 1824, and was partner with Mr. Edmund Sharpe, another famous Lancaster architect, whose sister he married. He died January 23, 1895. He and his successors, Messrs. Austin & Paley, have done much further work for the church and the institutions attached to it." Paley was the son of an Anglican vicar and was a regular worshipper at Lancaster Priory. Given the local opposition to the building of a Catholic church in Lancaster, he must have been a brave - and open-minded - character.

Posted by Canon Billington at 8:00 am