1860: Moving the Graves of Dalton Square 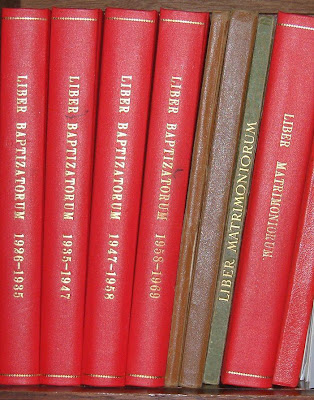 Records of baptisms, marriages and deaths are kept in all parishes. Canon Billington refers to the death register from the time of the Dalton Square chapel (1799-1859), forerunner of the present St Peter's: "As there was no burial-ground, though a few persons, including Dr. Rigby, were buried in the chapel itself, the last-named section of the register is headed "Dormientium in Domino Catalogus" [literally: the register of those who sleep in the Lord]; it gives date, name, residence, and cause of death, and Dr. Rigby often added a short personal note." Dr. Rigby was the rector (parish priest) at Dalton Square for about two decades; he must have come to know the local faithful very well and it is revealing that he often made his own comments in the register. Modern registers do not allow for this! 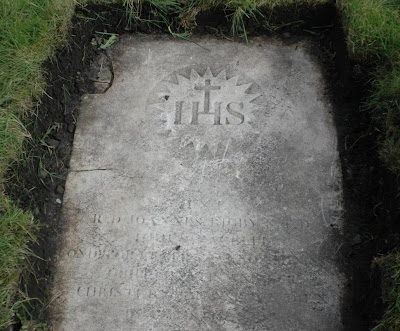 As the extract mentioned, Dr. Rigby himself, after his death was buried in the chapel, along with a few of the more prominent parishioners, as Billington records: "Helen Beetham, Nov. 9, 1827; Alice, widow of Robert Worswick, Oct. 24, 1828; Jane Beetham, Aug. 8, 1831; also some others. The remains were removed to St. Peter's Cemetery in January 1860." The above picture shows the stone which marks Dr. Rigby's grave. It was uncovered in 2008, having been beneath the surface for many decades. The lettering is very worn, possibly from the time when the stone was on the floor of the Dalton Square Chapel.
Posted by Canon Billington at 7:41 am