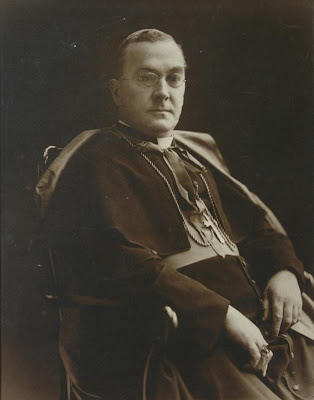 On this day in 1922 Robert Dobson, until that point rector of St Peter's church, was ordained bishop for the Archdiocese of Liverpool. Born in New Orleans in 1867, he grew up on the Fylde and was ordained priest in 1891. He succeeded Dean Holden as parish priest in Lancaster upon Fr Holden's death in February 1922, but his time here was short-lived. On 22nd August that same year Pope Pius XI named him Auxiliary Bishop of Liverpool; as a result he is the only rector of the present church to be made a bishop. Ordained to the episcopate by Archbishop Keating (with Bishop Richard Collins of Hexham and Newcastle and Bishop Joseph Cowgill of Leeds as co-consecrators), he served as auxiliary bishop in Liverpool until his death on 6th January 1942. The notice books make little mention of the event, though it is clear from the entries that some parishioners made the trip to Liverpool for the ordination ceremony.

Posted by Canon Billington at 7:05 am