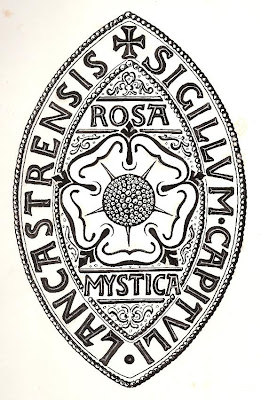 This is the seal of the Cathedral Chapter, the Canons, who have special responsibilities toward the Cathedral Church of the Diocese. The Chapter has a particular role in advising the Bishop and is responsible for choosing an administrator to run the Diocese if the Bishop should retire, fall ill or die before his successor is appointed. It was on this day in 1925 that the first Canons of the Diocese of Lancaster were installed; the notice book of 15th February announces the event: "Tomorrow morning at 11a.m. Solemn installation of the New Canons of the Lancaster Diocese, followed by Solemn High Mass in the presence of the Archbishop of Liverpool. The new Diocese by this act comes into being tomorrow. As many as possible should attend the ceremony to beg God’s blessing on the Diocese." 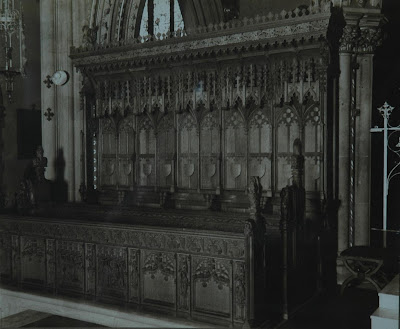 The Canons' rightful place in the church is in the choir stalls. Stalls were already in the church but these were enhanced for the foundation of the Diocese, with ornate backs being added; these were not completed until 1928. Originally there were two rows of stalls on each side of the sanctuary; the middle section was removed, reducing the number to one on each side, in the 1970s. The Chapter continues to meet at the Cathedral twice annually. Later in the year Billington's Blog will feature some pictures of the Chapter at different points in the history of the Diocese.
Posted by Canon Billington at 8:05 am