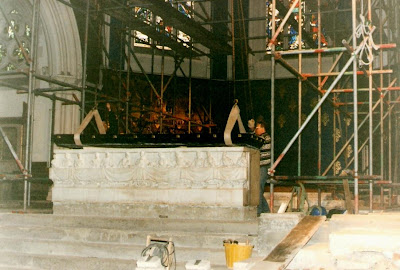 Up and away - the 1909 altar is about to be moved from its 1970s position. Today and tomorrow we feature a few pictures of work taking place for the 1995 reordering of the Cathedral. The altar seen here is about to be moved back to something like its original position; the triptych would later be reinstated above it. 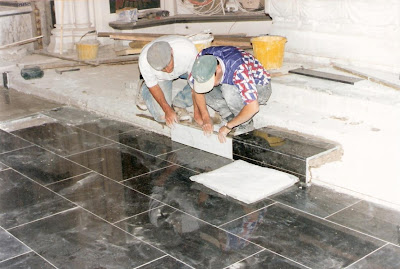 After yesterday's post about the marble steps, here we see them going back into their original pattern. The wood and carpet which had so long obscured them is already gone, though to this day the carpet can still be seen in the ground floor of Cathedral House. 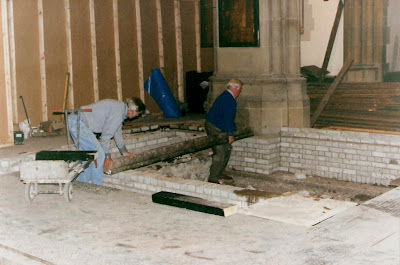 At the crossing of the transept, a new sanctuary is being constructed. This required the removal of a number of rows of benches, but had the great advantage of allowing a larger sanctuary which appears more central in the layout of the church. 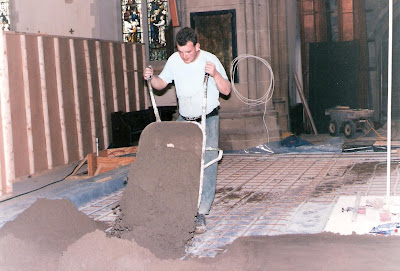 Now we know what's beneath the tiled flooring. 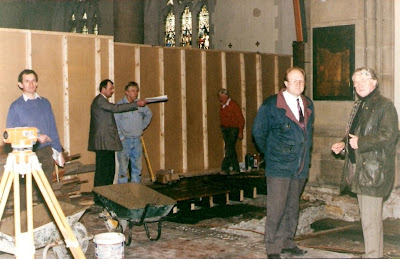 Screened off from the nave, work on the new sanctuary continues here. The memorial to Dean Brown, who founded the church, can be seen on the pillar at the right of the picture. Francis Roberts, the architect who masterminded the scheme, is also seen here, on the far right. 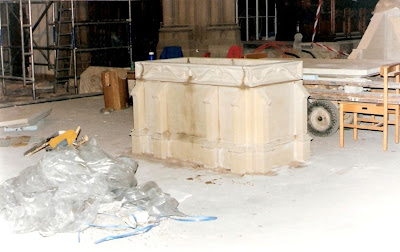 Finally, a picture of the new altar during its assembly. The new cathedra (bishop's throne) can also be seen behind. Tomorrow we feature a couple of images of high-level work taking place.
Posted by Canon Billington at 7:04 am