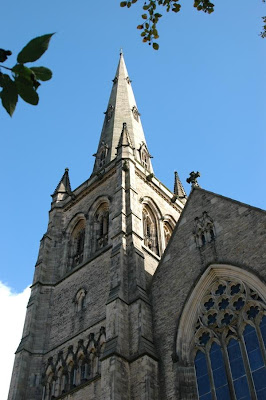 The Cathedral's beautiful 240ft spire is 150 years old today. In some ways it's an unlikely anniversary, given that at one stage the building of the spire was in doubt. Canon Billington tells the story: "Dean Brown had resolved not to open the church in debt, but his funds came to an end before the spire was erected, and it looked as if the church would have to be left unfinished for a time. It was known that Mr. William Marsland intended to leave money for the spire, and in order that there might be no delay it was arranegd that he should have an annuity of £50 during his life and give the capital sum at once. Thus the whole was completed without a stoppage, and the cross was fixed in position on the spire on September 14, Holy Cross Day, only three weeks before the consecration." 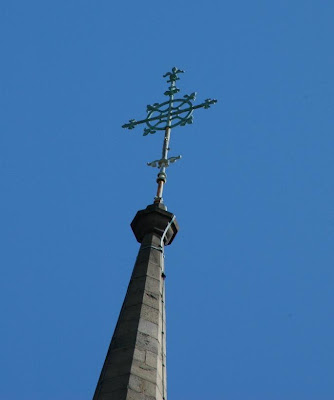 Later the Canon gives some details of the cross itself: "The spire is surmounted by a copper cross, 9 feet 10 inches high and 4 feet across." It was regilt in 1900, when some of the stonework around it had to be replaced, as this earlier post reveals. Meanwhile, the donor of the spire, Mr William Marsland, received his annual £50 payment several times, and had the pleasure of seeing his spire built, before his death on 23rd May 1863. 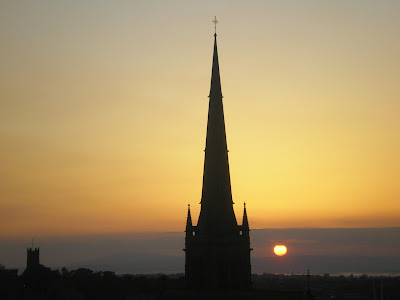 Posted by Canon Billington at 6:39 am