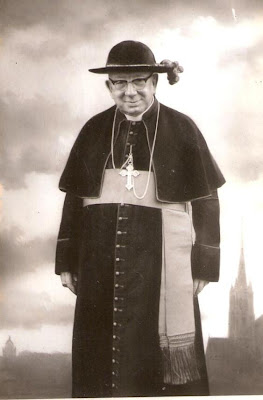 On this day in 1939, just a few weeks into the episcopacy of Bishop Flynn (pictured), Britain declared war on Nazi Germany. In Lancaster, Mass had begun at 10:30am and was continuing as Mr Chamberlain, the Prime Minister, broadcast to the nation at 11am. Towards the end of Mass Monsignor R. L. Smith entered the sanctuary and directed the celebrant to make the addition to the Prayer for the King in time of war; he then went to the pulpit and announced to the congregation that a state of war existed between Britain and Germany. It was a particularly harrowing announcement for the Sisters of St Catherine, who had come from Germany less than 18 months earlier. 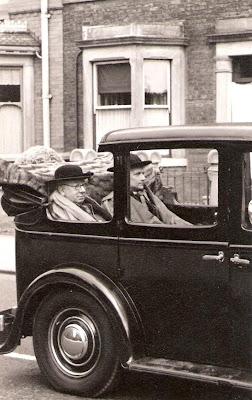 Bishop Flynn, who in appearance at least may be described as the 'Churchill of the north', demonstrated characteristically strong leadership in this time of crisis. His message for the outbreak of war was issued, with a decree that it be read at all Masses in the Diocese. Here are his words in full: "We have the fullest confidence in the power of prayer to avert from us the worst terrors of war. But whatever evil may befall, we must conduct ourselves with Christian fortitude, and be on our guard against any panic, for panic would probably cause far greater loss of life and injury generally than any bombs. Although much of our diocese is a receiving area, and no part of it is an evacuation area, we know that there is always the possibility of an air raid. To-morrow all our people will be praying before the Blessed Sacrament exposed for a speedy termination of the great evil which is now hanging over the world, for the safety of the country, and for the preservation of themselves and of all those dear to them. The advice of the A.R.P. authorities should be carefully followed. If warning of an air raid is received, those in the streets should at once seek shelter; crowding should be avoided and all discipline should be observed. Our faith in God is a source of strength in a time of trial. Those who live by it will enjoy a confidence which is the best guarantee against panic.”