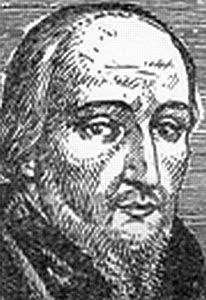 The Benedictine priest Ambrose Barlow, one of two canonized Lancaster Martyrs, died on this day in 1641. Canon Billington tells us that he is "venerated for his saintly life and apostolic labours as well as for his glorious death." He was born at Barlow near Manchester in 1585. He converted to Catholicism in 1607 and went to Douai and Valladolid to train for the priesthood; he joined the Benedictines in 1616, and soon after came to England. Canon Billington tells us a little about Barlow's encounters with another Lancaster saint: "He was several times imprisoned for religion. On one such occasion he had ministered to Father Arrowsmith, and it is related that this martyr, on the day he suffered, appeared to Barlow, then in South Lancashire, and gave the warning or prophecy: 'I have already suffered. You also shall suffer; speak but little, for they will be upon the watch to catch you in your words.' " After celebrating Mass on Easter Sunday in 1641 he addressed a congregation of about 100 Catholics; during his address the house was attacked by Protestants led by thier minister. Barlow was captured and sent to Lancaster. Sentenced to death, he replied with the words, "Thanks be to God", and prayed for forgiveness for his persecutors. He walked three times around the gallows while reciting the penitent psalm Miserere (psalm 50/51). A skull preserved at Wardley Hall, Worsley (now the residence of the Bishop of Salford) is said to be his.

Posted by Canon Billington at 6:38 am