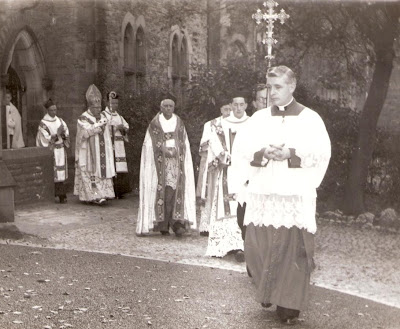 Today we begin a series of three posts on the centenary of St Peter's church, which was celebrated in 1959. Clearly these celebrations took place in October, but we feature them a little early to allow space for posts on the consecration of the church and its 1995 rededication when the October 4th anniversary comes round. This first post features the liturgical celebrations. 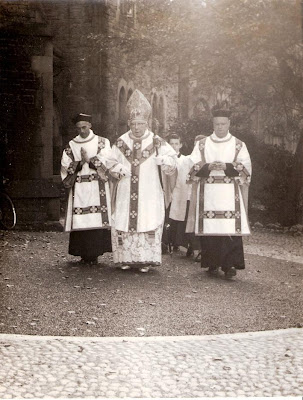 Bishop Flynn, Lancaster's second ordinary, celebrated Pontifical High Mass in the Cathedral on Sunday 4th October 1959, one hundred years to the day since the church had been consecrated. Here he is seen making his way towards the west doors, assisted by two priests acting as deacons. These vestments were bought to mark the centenary, and are still in use in the Cathedral today. 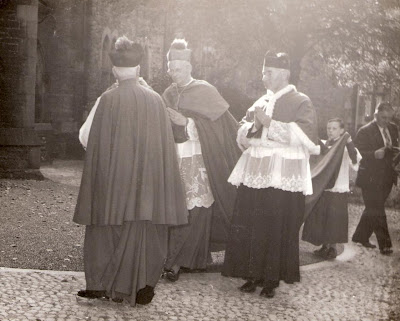 The sermon at Mass was delivered by Archbishop John Heenan of Liverpool, who is seen here about to enter the Cathedral. He is assisted by two members of the Cathedral Chapter and is seen wearing his cappa magna. 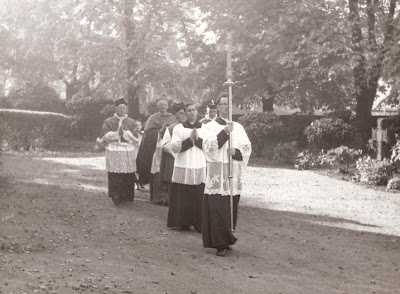 Here the Archbishop (who later, having been transferred to Westminster in 1963, became Cardinal in 1965) makes his way across the lawn at the front of Cathedral House. Clearly the celebrations were considered to be a success; the notice book entry for the following Sunday, 11th October 1959, records, "The Archbishop and the Bishop were delighted with the day's proceedings and were pleased to see so many of you at the services. May God bless you all." 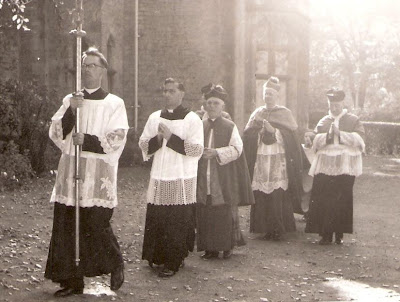 Posted by Canon Billington at 6:52 am