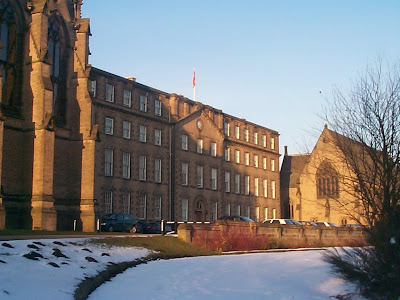 This is Ushaw College, four miles west of Durham city. For 200 years it has been a seminary - a place for training priests. For most of his life it was home to Joseph Preston, part of a family (other members of which we will meet later in the year) who had close connections with St Peter's. He died on this day in 1889 and Ushaw is now his final resting place. Canon Billington tells us a little about Father Preston, as he was one of the many priests who contributed towards the rose window in the south transept of St Peter's. He writes, "Joseph Preston... was sent to Ushaw when he was only six years old, and stayed there all his life as student or teacher, becoming prefect in his later years. He was ordained at St. Peter's, Lancaster, on August 1, 1886, and said his last Mass there on the first Sunday of Lent 1889, dying at his brother's house on St. Joseph's Day that year. He was buried at Ushaw." In death he is in good company; the Ushaw cemetery also contains the graves of most of the former Bishops of Hexham and Newcastle, and of Fr John Lingard, the well-known historian and parish priest of Hornby.
Posted by Canon Billington at 7:54 am