The School at Dalton Square 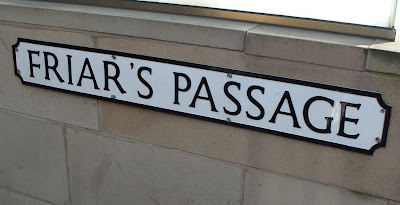 Behind the chapel at Dalton Square stood a school, as Canon Billington records: "The next work of Dr. Rigby's was to provide for the children. A school was built in 1805 at a cost of £222; and in 1818-20 a considerable addition, or perhaps a new building - that to the west of the chapel - was erected at a cost of £317. The school stood or stands in Friars' Passage, at the north-west corner of the chapel. It is a small building of two stories, the lower one for the boys and the upper one for girls. A large stone cross still marks the entrance. According to the proposals of 1805, the master was to have £20 a year and to teach twenty-five children free, so that the place was classed as a 'charity school'; any children in excess of that number were to pay fees. In 1825 about eighty children attended." Seemingly little or nothing remains of the old school, but Friars' Passage still exists. The name is not insignificant - on this site before the Reformation stood a Dominican (Black Friars) house.

Posted by Canon Billington at 7:15 am