1537: The Execution of John Paslew 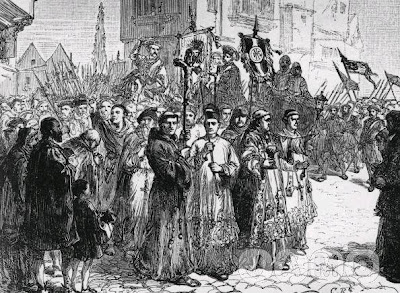 This is an image of the 1536 'Pilgrimage of Grace', a popular uprising that protested against the dissolution of the monasteries, the break with Rome and other aspects of the way England was being run. After the uprising ended, King Henry VIII had over 200 people put to death in an attempt to prevent any further trouble. Amongst those executed was John Paslew, Abbot of Whalley, who died in Lancaster on this day in 1537. Canon Billington writes about the event in his history of the parish: "The townsmen in 1536 clearly sympathised with the Pilgrimage of Grace, and a significant warning was given them early in the following year, when John Paslew, the venerable Abbot of Whalley, and a Sawley monk were executed at Lancaster for participation in that movement. William Trafford, Abbot of Sawley, soon afterwards suffered at the same place for the same cause. Two of the Furness monks were imprisoned in the castle." The Abbots are not counted among the Lancaster Martyrs, though they are mentioned at the foot of the Martyrs' Plaque on the Cathedral sanctuary.
Posted by Canon Billington at 7:10 am