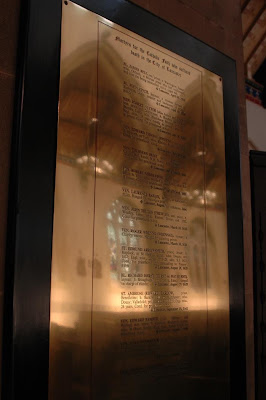 Among the names listed on the martyrs' plaque in the Cathedral are two Yorkshire priests who were executed in Lancaster on this day in 1601. Canon Billington says that their story has "something of the romantic" about it. This is, in the Canon's words, what happened: "Middleton, who had been brought up a Protestant, being converted when eighteen years of age, had been labouring near Preston, when he was in October 1600 captured by Sir Richard Hoghton. He was examined and sent to Lancaster, but on the way a rescue was attempted, the escort being attacked near Garstang. The attacking party, consisting of four horsemen and a footman, was driven off, and one member of it was taken and found to be another priest, Thurstan Hunt, who had lately escaped from Wisbech Castle. The two priests were sent to London to be examined, and being returned to Lancaster five months afterwards, were tried and condemned for their priesthood." At the gallows the two priests asked each other's blessing before being executed, weaing their cassocks. Seemingly many of the townsfolk sympathised with the priests. Billington records, "Every one lamented their death, for all the world perceived their innocency; and not only Catholics but schismatics and of all sorts strive to have something of their relics." He also quotes an earlier source which claims, "In all of Lancaster there could not be found any that would either lend horse of car or hurdle or any such-like thing for their death; so the sheriff was fain to take one of his own horses to draw the sledge."
Posted by Canon Billington at 6:57 am