Inside Dalton Square I 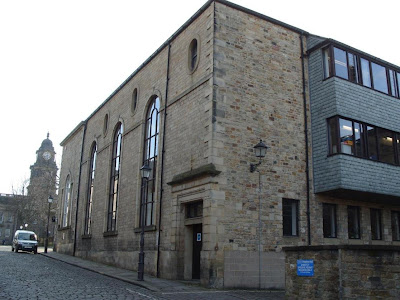 On this day in 1798 the foundation stone was laid at the new Catholic chapel in Dalton Square. It would take less than a year to complete the building, which opened on 1st March the following year. To mark the anniversary we take a two-day look at what it was like inside the chapel. The doorway you can see in the picture is presumably original; Canon Billington records, "The entrance was by a wide square-headed door at the north-east corner. As Friar Street slopes down from the square, this entrance was below the level of the floor and internal steps were needed... Internally the arrangements were quite simple. The altar... was placed at the Dalton Square end. The wall behind it was 'ornamented with a beautiful altarpiece', executed in chiaroscuro by Mr. Baker of Wakefield... On each side of it were figures, one of St. Peter and the other of St. Paul." 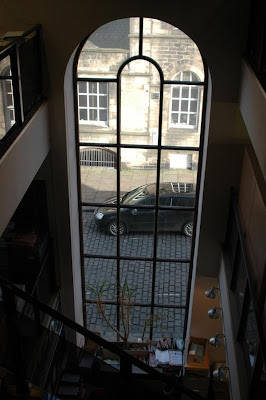 Today the interior is divided into several floors, but the visitor can still get a sense of the size of the chapel; the building seems bigger inside than it appears from without. Room to seat a few people, then: "The seating arrangements were those usual at the time; there was no central aisle, but two side passages, the seats being fixed in the centre (with a partition down the middle) and against the east and west walls. At the north end was a gallery, in which an organ was afterwards placed. At the same end, below the floor, was a burial vault. There were no stations of the cross, nor any side altars; but in its later days an image of our Lady was placed in the chapel, and there was also a crucifix on the west side. Two large candlesticks stood by the altar rails, containing candles lighted during the elevation." 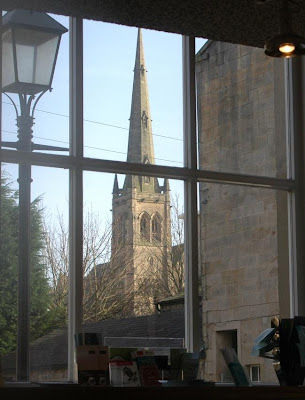 Today the reception area of the offices stands at the south end of the building, where the sanctuary was in earlier days. A window in the reception gives a wonderful view of the church of St Peter which replaced the Dalton Square chapel. Our thanks are due to Mr Stephen Gardner and the authorities at the City Council Planning Department, whose offices now occupy the building. We owe to them the pictures in the posts today and tomorrow, along with some other images being used later this month.

Posted by Canon Billington at 7:37 am