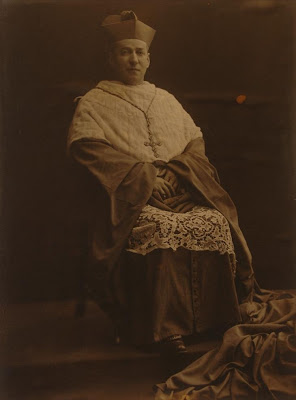 On this day in 1928 Frederick William Keating, second Archbishop of Liverpool (successor of Archbishop Whiteside), died unexpectedly at the age of 68. He had grown up in Birmingham and been administrator of the Cathedral there until being made Bishop of Northampton in 1908; he was then appointed to Liverpool after Archbishop Whiteside's death in 1921. During his time the new Diocese of Lancaster was formed, and so Archbishop Keating was the last Liverpool bishop to have jurisdiction over Lancaster. Seemingly he was both surprised and upset by the division of the Liverpool Archdiocese, though after the decision had been taken he pledged his full support to the new Bishop of Lancaster, Thomas Wulstan Pearson. It was Archbishop Keating who began the appeal for a new cathedral to be built in Liverpool, leading eventually to the opening of the Metropolitan Cathedral of Christ the King in 1967.

Posted by Canon Billington at 7:55 am